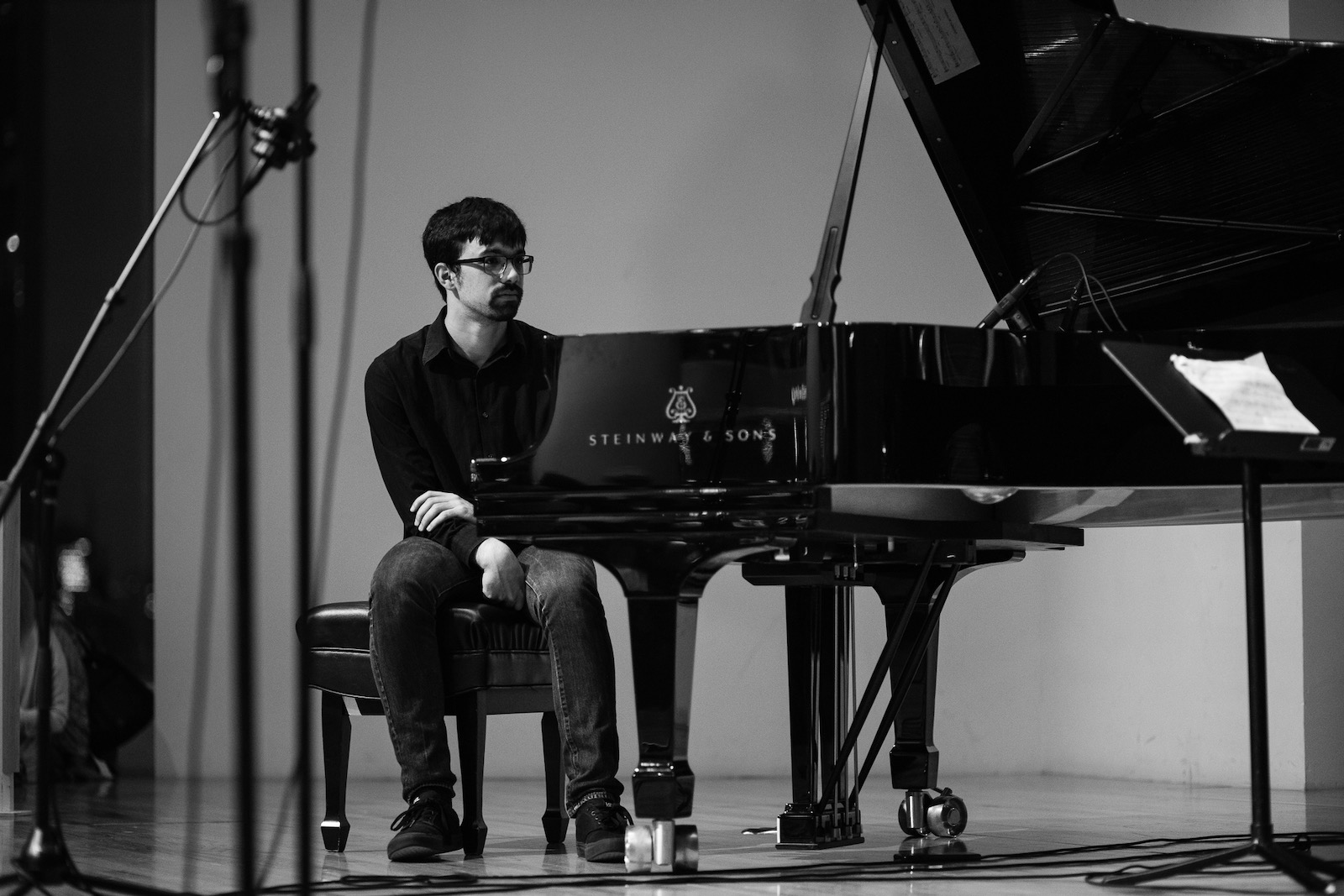 Ever since the Covid-19 era began, I’ve been daydreaming about a basement down a flight of stairs on 7th Avenue South, in the West Village. It’s a room where I’ve spent many late-night hours over the last thirty years. There’s a small bar in back, a stage in front. The tables are packed so closely together that it was probably some kind of hazard even before the pandemic, at least for those who had to navigate between them, taking orders and serving drinks. The green-felt walls are covered with framed photographs of John Coltrane, Bill Evans, Dexter Gordon, Cecil Taylor, and others. It’s not a beautiful room, it’s even a little shabby, but it’s a room dedicated to beauty—the beauty of live jazz at the Village Vanguard.

The Vanguard, which opened in 1935, is closed now—as are New York’s other great jazz spaces, from the Jazz Gallery to the Jazz Standard. For now, “live” jazz is being Zoomed from musicians’ apartments, like all the performing arts.

In the case of jazz, the loss seems especially cruel. Jazz musicians often describe their work in the language of time, from Charlie Parker’s “Now’s the Time,” to Dave Brubeck’s “Time Out,” to Tyshawn Sorey’s “Adornment of Time.” That’s not surprising: as an improvisatory art, jazz celebrates creation “in the moment,” expression that takes flight in performance under the pressure of time, never to be repeated in exactly the same way.

But jazz is also a music of space, of the places where it’s played, the places to which it belongs in our memories. Some of these places have been in open air. Think, for example, of Duke Ellington and his orchestra at the Newport Jazz Festival in 1956, or Sonny Rollins practicing his tenor saxophone a few years later on the Williamsburg Bridge. Others have been in some futurist region of the mind, notably in Sun Ra’s lyric “other worlds they have not told you of / that wish to speak to you.” But the most influential places in the music’s history have been indoor clubs, concert halls, and loft spaces: exactly the kind of places we can’t enter these days. The history of New York jazz alone could be told through those rooms, from the big bands of the Cotton Club to the creation of bebop at Minton’s, from Coltrane at the Vanguard to Ornette Coleman at the Five Spot, from the loft experimentation of Studio Rivbea to the swanky neo-traditionalism of Jazz at Lincoln Center.

The piano trio has always held a special place in my experience—and imagination—of jazz clubs. Maybe it’s because I was introduced at an early age to albums like Ahmad Jamal’s 1958 masterpiece of cocktail modernism, Live at the Pershing, and Bill Evans’s seminal 1961 Sunday at the Village Vanguard with the drummer Paul Motian and the bassist Scott LaFaro, both of which revolutionized the art of the trio. Later, at the Vanguard, I had the privilege of seeing trios led by Tommy Flanagan and Geri Allen (both now deceased), Fred Hersch, Craig Taborn, and Jason Moran. And the most exciting debut on record that I’ve heard in the last year is a piano trio recorded live in March 2019 at Kitano, a small club in a boutique hotel of the same name on Park Avenue and 38th Street.

I wasn’t there, sadly, when Micah Thomas played with his trio, featuring Dean Torrey on bass and Kyle Benford on drums, but I’m only the more grateful that sound engineer Jimmy Katz was on hand. Recorded over two sets in a single night, Thomas’s album Tide is an exemplary work—not just of small-group improvisation but of what might be called small-room jazz. To hear it is to remember what it’s like to sit among a group of strangers, hearing an hour-long set impeccably designed for the dimensions of the room. It moves from track to track with a casually inventive, seemingly spontaneous sense of flow that feels both inevitable and surprising. It has the intimacy of conversation, as much with the audience as among its members. The music has worked its way into my mind so powerfully I’m no longer sure I wasn’t at Kitano’s that night.

There’s nothing radical, or especially innovative even, about Tide. Still very young—a twenty-two-year-old student finishing a master’s at Juilliard—and quite unassuming, Thomas isn’t trying to reinvent the piano trio so much as to offer his own gloss on it. Not surprisingly, then, the album is earnest, even a little old-fashioned: there are no hip-hop grooves, no samples, here; rather, a sound more evocative of the 1960s (or perhaps of a young man’s dream of 1960s jazz) than of the 2020s.

“Tornado,” the bracing first track, begins with terse, ruminative solo by Thomas, then launches into kinetic group interaction, in a manner reminiscent of Chick Corea’s 1968 trio Now He Sings, Now He Sobs, an album that Thomas mentioned as one of his favorites when we spoke by phone a few weeks ago. You can also hear unmistakable echoes of Bill Evans’s great trio with Motian and LaFaro, both in the melancholy romanticism of Thomas’s writing (he composed all eight tracks), and in the non-hierarchical way the three musicians converse with one another.

Yet the music on Tide never feels like an ode to a glorious past. It has the freshness and urgency that conviction confers, and that conviction never flags throughout its sixty-four minutes. Thomas’s piano-playing has a wonderfully singing tone, but his lyricism is more than matched by his rhythmic suppleness and drive. He’s also a marvelously sensitive listener. Listen, for example, to the way he accompanies Torrey’s bass solo on the title track. First, he offsets it with subtle, pianissimo accents, then he vanishes for a moment so that we can hear the walking bass against the crisp beat of Benford’s cymbals. Whether he’s asserting his presence or laying out, Thomas always enhances the music’s effect, by rendering its architecture more precise and lucid.

The son of an Indian Christian pastor from Chennai and an American woman who teaches English as a second language, Thomas was born in 1997 and grew up in the suburbs of Columbus, Ohio. There was music in the home: his mother studied classical violin; his father had an extensive collection of albums by Coltrane, Thelonious Monk, and Miles Davis. Micah started playing piano at age two and was improvising by four. “It was only when I was eight that I started playing jazz,” he told me. Only, as if this were a late start, and he’s been having to make up for lost time ever since.

When he was fifteen, he met the gifted jazz pianist Sullivan Fortner at a summer workshop for young musicians. Fortner became a mentor, and “set me a more specific path musically.” Thomas speaks reverently of other contemporary pianists, such as Moran and Taborn, but says he’s more influenced by horn players—above all, Charlie Parker, who “controls the flow of melody at any point, so that the music surprises you at specific, indivisible moments.” Tide sparkles with such moments.

At Juilliard, Thomas first studied with Frank Kimbrough, an adventurous post-bop pianist whose 2016 album Solstice is one of the most enchanting trio albums of recent years. “The first lesson I had with Micah was the most terrifying hour of my life as a teacher,” Kimbrough recalled when we spoke. “His harmonic sense is so deep. I felt like I was looking over his shoulder trying to steal stuff from him, and he’s seventeen years old.” Kimbrough asked Thomas if he knew of Olivier Messiaen’s 1944 devotional work for solo piano, Vingt Regards sur l’enfant-Jésus; he soon had his answer.

“I was thinking he’s from this small town in Ohio,” Kimbrough told me, “and then he sits down and plays the first regard from memory.”

Under Kimbrough’s tutelage, Thomas played Scriabin, memorized all of Monk’s tunes, and transcribed solos by Charlie Parker and Art Tatum. He also studied with the drummers Kenny Washington and Billy Drummond. Meanwhile, at night, Thomas was gigging at Small’s and Dizzy’s in bands led by the vibraphonist Joel Ross, the trumpeter Etienne Charles, and the alto saxophonist Immanuel Wilkins, with whom he developed an especially close artistic partnership.

After Thomas’s first year at Juilliard, Kimbrough encouraged him to document his work in the studio. Thomas, ever the modest Midwesterner, replied (in Kimbrough’s words) with “a look of horror.” But the suggestion planted a seed, and Kimbrough helped land Thomas a gig playing solo at Kitano on Tuesday nights.

Soon after, Thomas formed his trio with Torrey and Benford (who’s since been replaced by Kayvon Gordon). He loved the trio format because of its unusually democratic “balance between complex structure and improvisational dialogue,” in which no member is consigned to the background. In the summer of 2018, while preparing for the band’s first concert, he wrote the tunes on Tide. They reveal his flair for melody, and the eclectic breadth of his listening.

“The Game” alludes to the fourth movement of Mahler’s Sixth Symphony; “The Day After” evokes “Choro das Águas,” a 1977 ballad by the Brazilian singer Ivan Lins; “Grounds,” a sunny, rollicking song with a bluegrass sensibility, was inspired by both Bach and Ornette Coleman. But these influences have been absorbed with such confidence and intuition that they never become showy or distracting. Pure, concise, unpretentious, the writing carries us directly into the music. (Indeed, one of the striking features of his tunes is how often they seem to begin in medias res, as though we’d walked into the club seconds after the trio started playing.)

The first half of the album consists of straight-ahead pieces, essentially vehicles for improvisation, but in the second half Thomas and his trio start to draw decidedly stranger and darker shapes—almost as if, having won over the audience, they can get down to business and show what a group of improvisers can do. In “The Game,” which is the longest track and the album’s centerpiece, we hear a riveting sequence of moods, dynamics, and time signatures: lyrical rapture, percussive attack, glittering cascades of bop notes. Thomas invokes a passage from that “Tragic” Sixth Symphony of Mahler’s, but it’s soon overtaken by Cecil Taylor-style glissandi. And in the closing moments, all we hear are brutal, staccato sounds from Thomas and Torrey’s arco playing—as well as the muffled but distinct sound of trembling wine glasses. That isn’t incidental to the overall effect: like the sound of applause, it’s a trace of what Thomas calls “the vibe that comes when you’re playing in the same room for an audience.” If you’re a jazz fan, you can’t hear it  today without experiencing an added tinge of sadness.

Thomas is currently self-isolating in Ohio, where he’s studying more of Messiaen’s Vingt Regards sur l’enfant-Jésus. When he returns to Juilliard, he hopes to continue his work with the trio, but he also told me: “I’m not set on anything, or on a particular format. I’m more in a finding mode.” Tide brilliantly documents what he and his trio “found” on a single night in March 2019. “This whole album,” he says, “is just some of my first good writing.” Echoing that, Kimbrough observes that, for a musician Thomas’s age, the work on Tide is “already old, since he’s moving so fast.”

What, then, does Micah Thomas’s trio sound like today? With luck, we’ll be finding out soon, in a room worthy of his talents. The Vanguard wouldn’t be a bad place.