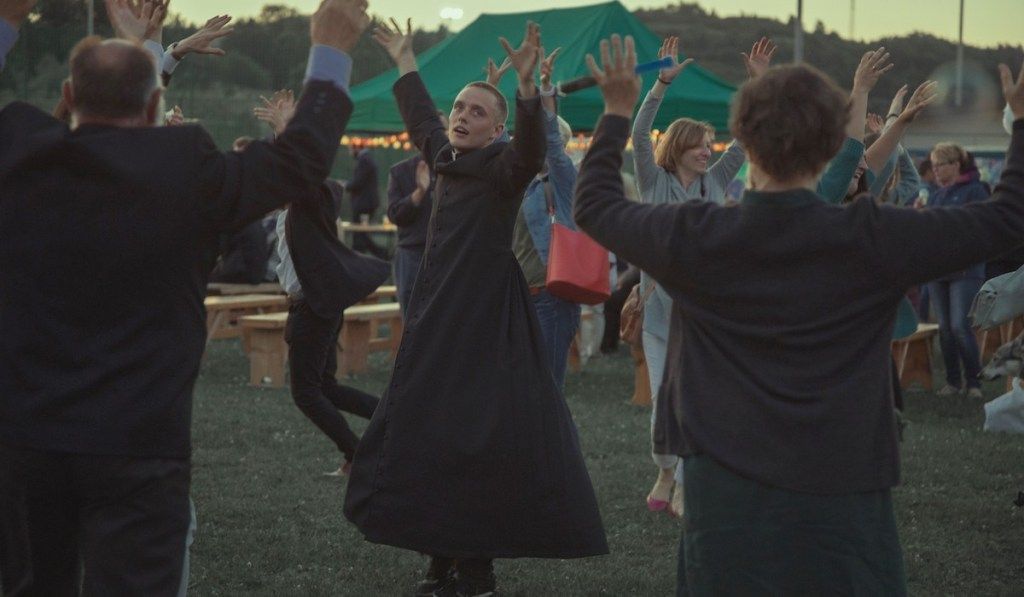 The new Polish import Corpus Christi was nominated for the Best International Film Oscar but lost to South Korea’s Parasite, a choice that reflects the Hollywood Left’s current fascination with Communism and the forced redistribution of wealth and property. That film regarded moral depravity as farce, which Corpus Christi does not.

Yet Corpus Christi’s depiction of our modern moral quandary also proves uniquely — peculiarly — of this time. Daniel (Bartosz Bielenia) is a rascal in a Polish reformatory whose misbehavior and rebellious predisposition test his Catholic upbringing. He’s first seen standing look-out while a gang brutalizes another youth. At mass, Daniel’s treachery comes into focus during the priest’s homily: “I am a murderer. Yes, you heard me right. I have killed. I killed in my thoughts. I killed in what I failed to do. I killed in what I did.”

Director Jan Komasa avoids putting too fine a point on his ironic thesis in Corpus Christi by complicating it. The priest reveals his subject to be forgiveness: “Forgive means love. Love someone despite their guilt.” Komasa similarly challenges the audience by contrasting piety with impudence.

When Daniel is released and skips his work assignment at a sawmill to pose as a new priest in a small town, his imposture — as Father Tomasz — verges on blasphemy. Our view of Daniel is kept off-balanced. He has the insolence of lost youth; he’s a member of a miseducated generation that gives in to temptation yet rejects piety. This parallels the village teens who suffer a recent tragedy that has divided their community. The youths resort to drugs while the adults hold on to hollow church ritual or business-as-usual — literally so when the mill owner (Leszek Lichota) orders Daniel not to upset the status quo. Daniel says, “You have the power, but I have the right,” and the big shot responds, “You have the right, but I have the power.”

This exchange typifies the good/bad dialectic that informs screenwriter Mateusz Pacewicz’s ambivalent view of religious tradition in the digital age. (Daniel/Tomasz fakes his way through ritual Confession by consulting the litany on his cellphone.) Throughout Corpus Christi, Kosama and Pacewicz’s observation of modern piety seems to be a search for holiness. It recalls Robert Bresson’s extraordinary The Devil Probably (1977) — with its emphasis on the ambiguous charm of post-hippie youth returning to God despite ecological, New Age fashion — as well as Bruno Dumont’s debut film, La Vie de Jésus (1997), a deliberately rowdy, graphic gang-movie allegory.

Corpus Christi is not as original as those respectively daring, searing films, but its ambiguous style certainly conveys contemporary miasma. As Daniel/Tomasz ministers to a cynical, guilt-ridden, utterly confused congregation, cinematographer Piotr Sobocinski captures the haze of faint religious and moral tradition (in near monochrome with faint color). Daniel/Tomasz never goes through conversion exactly. His experience matches that of skeptical, disillusioned people in conflict with one another and who thrash themselves physically and spiritually. When the recent violent past catches up with Daniel/Tomasz, he is reminded “how far we’ve walked away from God.” This pained protagonist is not a Christ figure but a man struggling to be a representative of Christian teaching, fighting for Christian belief.

Komasa and Pacewicz deserve credit for not succumbing to trite political rationales, which ruined Paul Schrader’s First Reformed, a quasi-spiritual film favored by secular and atheist critics. Corpus Christi maintains commitment to morality as a faith. It could be very instructive for this period, especially when politician feign religiosity and “prayer” as a cover for their political motivations. Corpus Christi confronts the modern circumstance of godlessness that is at the core of social division. That first homily is haunting:

Know what we’re good at? Giving up on people. Pointing the finger at them. “Forgive” doesn’t mean forget. It doesn’t mean pretend that nothing happened. “Forgive” means love.

When Corpus Christi opens this week, you can make up your mind about the folly of the Oscar choice and whether or not the Academy’s decision was a sign of both bad politics and immorality.