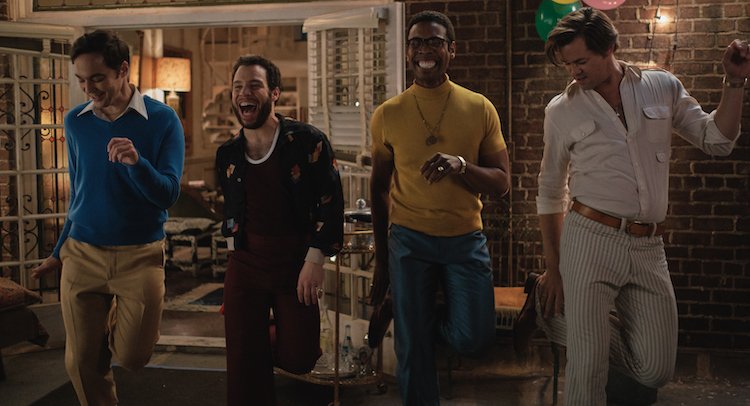 “Call you tomorrow,” the ennui-laden Harold tells his host, Michael, as he leaves his birthday party, where they’ve engaged in vicious parlor games that would make Who’s Afraid of Virginia Woolf’s George and Martha blanch. The line is, of course, from Mart Crowley’s 1968 play The Boys in the Band, about a friend group of gay men who drink, smoke, snipe, and parry in a single evening. They even get in some dancing and laughing as they air some dirty laundry as Harold arrives late to his party.

The latest iteration of Crowley’s landmark work is the Netflix film produced by Ryan Murphy and helmed by legendary theater director Joe Mantello, who directed the 2018 Broadway production that famously starred a cast of only out queer men. Since he wrote it, Crowley’s text has been examined and recontextualized in terms of its depiction of gay life, and not just by the actors who’ve stepped into the roles Crowley (who died earlier this year) created.

It’s also been scrutinized by those who either view it a crucial living document or as an antiquated throwback to times some LGBTQ+ people would rather forget. Mantello and the actors who re-created the roles each night on Broadway and who came together for a glorious time to shoot the film (out on September 30) prefer to move on from the hackneyed critiques of the text that its characters are “self-loathing” or brimming with “shame” and consider their roles as portrayals of men who exhibited strength in adversity and became each other’s found family.

“What I have come to realize is that this idea that these men or that the play is full of self-loathing … and P.S., I recognize that this is easier for me to lean into because of my character being the anomaly, but it feels like we’re being overpoliced,” Robin de Jesús, who plays Emory, who takes potshots for his tendency to camp it up, tells The Advocate in a Zoom call with Mantello, Jim Parsons (Michael), and Michael Benjamin Washington (Bernard).

“This idea of us having to only play noble characters, when, in actuality, if you are looking at the movie with the purest intentions, I think what you see is not ‘self-loathing.’ What you really do see is society and its oppression and its shame,” says de Jésus, whose being Latinx lends a layer to the character of Emory that didn’t exist when the actor Cliff Gorman played him 50 years ago.

The idea of refocusing the text to amplify the resilience of the men resonates with Parsons, Washington, de Jésus, and Mantello.

“When I look at the film now I see a wide array of characters, and I certainly think that the character that Jim plays is probably the most complicated with regards to those issues,” Mantello says. “But I also see Robin and I see his Emory, and I see someone who stands up. He’s the only person in that room that stands up and is unapologetic for who he is.”

Both Mantello and Parsons worked with Murphy on his 2014 film adaptation of Larry Kramer’s The Normal Heart and recently on his Netlfix series Hollywood. Mantello shares that it took some convincing to get him come aboard the Broadway production of The Boys in the Band. But Murphy offered a reframing by suggesting he view it through the lens of an Edward Albee play.

“All of a sudden, it made a lot more sense. I feel we’re going to hear this a lot, this idea that it doesn’t paint gay men in the best light,” Mantello says. “I always feel like one of the things that happens is, in some way, these characters are looked upon as somehow that they have failed in some aspect of their lives or they’re weak or that they don’t measure up.”

The cast of The Boys in the Band

Crowley’s characters aren’t merely throwbacks in their belled pants and wide belts performing Judy Garland and Bette Davis impersonations as they toss the term “analyst” around. Rather, they are prescient beings for whom the iconography of the set and costumes remain in the late ’60s/early ’70s, but the meaning of the text has continually evolved. When Zachary Quinto’s sublimely disassociated Harold calls out to Parsons’s barbarous Michael just as he’s about to leave with a hustler (played by Charlie Carver) that he’ll call the next day, it’s a line that gets to the crux of queer community and found family.

“I’ve personally felt both in the play and when doing the movie that I was playing a character who needed such forgiveness by that family by the end of it,” Parsons says of Michael, who’s haunted by his Catholic upbringing and falls off the wagon when his old college chum Alan (Brian Hutchison), who has a closeted past, turns up unannounced.

Throughout the night, Michael pushes his group — Washington’s Bernard, a bookish Black man who endures racist barbs, Larry (Andrew Rannells), a lothario struggling to please his monogamous lover, Hank (Rannells’s real-life boyfriend, Tuc Watkins), and Michael’s confidante and past hookup, Donald (Matt Bomer) — into a game where they win points by calling the one person they ever truly loved. The results of the ensuing calls are heartrending and poignant.

“Mart so beautifully put in that last line with Harold, the ‘Call you tomorrow,’” Parsons says. “It’s just so moving to me. … That’s exactly what you’re looking for from whatever your family is or the people that you’re around.”

“The people you surround yourself with is a latitude, a forgiveness factor,” he says.

Washington, who appeared in Murphy’s Ratched this September, is the character asked to forgive the others the most. With his artistic and gentle demeanor, Bernard endures nasty epithets from Michael and even his closest confidante, Emory. The actor initially wasn’t sure he wanted to take on the role.

“I didn’t get it. I just didn’t understand what the function of the character was. We got to the first workshop, and as Joe said about Edward Albee, he and Mr. Murphy mentioned that they had seen this play or read this play through the lens of addiction and the people we become when we use,” Washington says.

“Suddenly, this kind of answered all of the questions about when it turns dark, where does the character turn from? Is he turning back to the light ever? I started to figure out a lot of what I could do with it while we were in the [Broadway] run. Initially, I was terrified of it. I tried to run from it.”

Washington touches on the scene in which Bernard, Michael, Emory, and Larry dance a number they learned at Fire Island as Donald looks on. It’s “happy and joyful,” he says, but soon the mood shifts and there’s a pecking order of nastiness that pinballs around Michael’s apartment amid a heat wave.

“It became more familiar and more paternal in a big way, like brothers were fighting, versus the Black guy is about to get lynched, which was in my head the whole time [at first],” Washington says. “It’s bad. It’s really bad, but it’s somebody [Michael] who’s just fallen off the wagon and this is the drunk he becomes. That became a love relationship that I was able to find with Jim’s character. That’s why it hurts more than I’m upset.”

The men, who’d formed a bond over many months on the Tony-winning Broadway production, became their own friend group, which Parsons says only became more intensified when they shot the film, considering the intimacy of the medium. As Parsons continued to engage with his character and the text, once a rare piece of queer work for those who felt invisible or alone, he realized that it was in some ways personal for him.

“One of the things I discovered spending two summers doing this play is the level of fear of losing loved ones for the fact that I was gay. I realized that was something I grew up with,” Parsons says. “I didn’t think of it consciously for most of my life, but during this process, it occurred to me. I’ve kind of been my own therapist with this, I guess, and I’m like, ‘Oh, that was something I realized deep down I felt. Once they know [that he’s gay], I lose them.’”

“There’s something about this play and the relationship this group of men have together that is like, ‘No matter who you are, reveal yourself to me.’ You’re not going to lose them,” he says.

Meanwhile, de Jésus hearkens to the personal element and the timeliness of the layers that his being cast as Emory lends to the text.

“What’s [particularly] interesting and nuanced is my dynamic with Bernard, because that idea of sort of the racial transgressor being the light-skinned one, the one who passes, the Afro-Latino, is a conversation that I feel is finally having its moment now,” de Jésus says. “I’m really excited that [those who feel represented] get to look at our movie and look at what me and Michael get to do and then can discuss that. It contributes to the allydom that the Latinx community and Black folks need, especially right now.”

Regarding working with Murphy and how this new iteration of The Boys in the Band stands on its own, Washington says, “Some people call him a revisionist history maker. He makes a time machine. It can go back to Hollywood and say, ‘What if this were the scenario?’ Or ‘Let’s go back to African-Americans and Latinos in the ’80s in the AIDS epidemic and give the narrative to the people [in Pose].’”

“‘Let’s give Boys in the Band the narrative to the people who would have lived it. Does that change the story, and does that leave a new picture?’” Washington says. “I love the new picture he’s leaving in a digital medium for the next generations.”